Once again it’s time for some info for our tabletop fans. Tactical, Topographical, Table-Top Terrain is not only an interesting title but also the name of a currently popular Kickstarter. Terrain Kickstarter projects usually are popular but this one stands out to use because it seems like it could fit with Shadowrun, 40K or many other games. We think some of you might want to even back it. 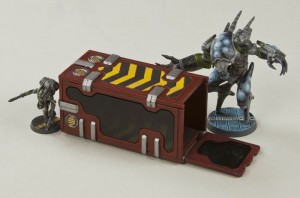 So if you play tabletop quite a bit you are probably wondering what the scale is. It falls in the mid-size of most terrain. A bit bigger than your normal hills but not absolutely huge.

However they have plenty of space for your average figures. The more impressive packages are expensive but also come with a great deal of items. You could easily create a whole map from it. We think it could be quite handy for a Shadowrun RPG setting or 40K city fight.

What is so interesting about it is that the large packages have both the city tiles and buildings so it’s basically a full board in and of itself. Some of them even have multiple stories so that you can perch units on the top or the side for elevated battles.

This is of course one of our favorite types of Kickstarter. The one where you donate and get pieces yourself. You can get anything from a few pieces to a small city. Of course the only downside is you won’t have your name in the credits or plan it yourself. To be honest though we have hundreds of those projects and it’s nice to just get something useful. Would this work for your own tabletop club? Maybe, but we will let you decide whether you want it or not.