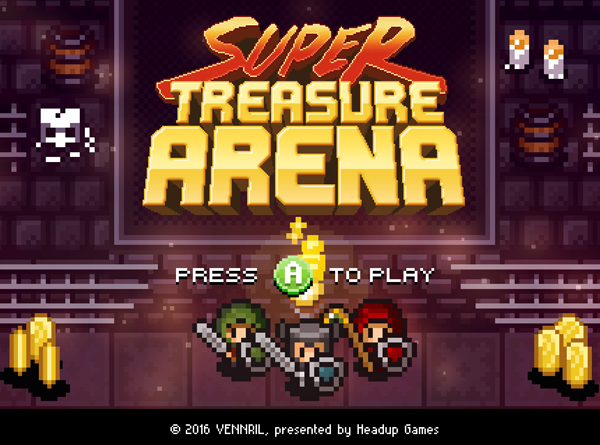 Super Treasure Arena brings you the graphics SNES Zelda graphics with party game action. You aren’t working with friends to defeat evil. Instead you try to kill each other and steal all the coins.

Super Treasure Arena in a Nutshell

There are two modes at base. One in which you attempt to collect more coins than the other players. In the other mode you have to collect chests and return them to a base. Between those objectives there are lots of explosions and rage with friends.

Somehow this game feels like playing Super Smash Brothers with items on. Everyone is trying to crush their opponents at any cost. Meanwhile someone picks up a powerful item and roasts several players. That’s how this game feels.

The version we played has many levels, bots and several enemies as well. It’s refreshing in this era since most Early Access games start with bare-bones gameplay. If this is only the starting point for their game the final product is going to be amazing.

High-energy, fast-paced songs take center stage on each level. You won’t find any sweeping orchestral pieces here. It is the perfect soundtrack for this sort of game.

The art style and controls feel like classic top-down RPGs. Most notably “A Link to the Past” as well as “Pocky and Rocky”. If you’ve played either of these games you have a good feel for the basic game. 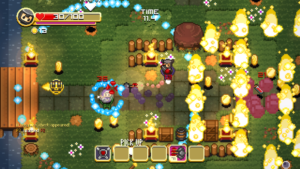 At first the characters seem to have no clear distinctions. Sure their appearance differs from Fighter to Ninja but that doesn’t mean much. Each character has their own unique super attack to set them apart. They range from a flaming sword to ice powers which stun enemies. Your selection does have an impact on each game.

Everyone starts with a basic melee attack. Over the course of the fight you will pick up bombs, shotguns and explosive arrows. Each weapon feels different with separate splash and dispersal mechanics.

Super attacks reward skillful placement and allow players to come back from early deaths. Super attacks add extra strategy to capture-the-chest levels due to stunned players. A great player can turn a match around with one super-powered multi-kill.

It’s a small part of the formula but an important one. You will be able to play online with friends even in Early Access. We used to take this for granted in multiplayer games. Now it’s a feature you need to check for in any Steam multiplayer game. 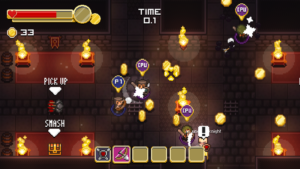 Not a Friendship Builder

This is not a cooperative title and you shouldn’t mistake it for one. Super Treasure Arena is about annihilating your friends while they are on the cusp of victory.  It’s a game where you get in there and destroy all the hope in your friend’s eyes. You can always play against bots if the competitive aspects throw you off.

Comes out September 15th on Steam. Developers are working hard to create an early polished product. Be sure to keep an eye on it if you’re a fan of top-down, high-octane games.