KS Double Feature is something we’ll be doing here and there. We’ll take a two Kickstarter projects in two genres and put them up at the same time. Our first one is Snappy Stencils. It is remarkable for reaching 400 percent funding in a very short time and being such a simple but useful idea. It allows you to easily create some cool patterns with an air brush or other tool. 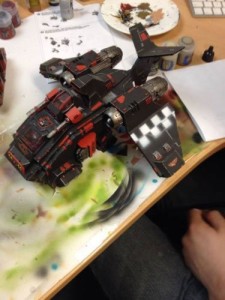 The Snappy Stencils Themselves

These particular durable stencils come in a variety of shapes including:

You simply hold the sturdy setup over your piece and spray it on. From science fiction to fantasy there are a ton of different styles to choose from. If you are a tabletop gamer there is some sort of pattern in here for you. There isn’t anything special about them except there are a ton of different designs to choose from. What does stand out is that they have had such a successful project.

Why the Snappy Stencils Kickstarter Stands Out

I have previously been under the impression that you need to have more expensive rewards to do well. I still believe this holds true if you are asking for 10K+ money. However this Kickstarter is at 4,000 and climbing. This is because they offered 15 designs for 25 British pounds. That is a really excellent deal all around.

This tells us who follow projects like this something interesting. It tells us that if you are going for a smaller funding goal then you should try to have a really good deal at a low price point. At the time of this writing they have 23 days left. You won’t be getting any special stencils but if you are a war gamer you can get a ton of useful ones. Be sure to check it out yourself.