Terraria 1.0.4 has just been released and the first guide is getting a bit too fat. So we’re starting on part 2. If you’re trying to find the groom, head to the end of this page.

With twenty silk and black die you can make Tuxedo pants and jackets.

As you can see in our pic, Harpies are on the floating islands.

With thirty gold bars and four rubies you can make a crown.

With two goldfish and one glass bottle you can make a fish bowl.

To make sunglasses, take two black lenses and put down a  workbench, table and chair. You should be able to make it there.

Twenty silk and three green dye per piece gets you the hero set, makes you look like link from Zelda. You get green die from 3 jungle seeds combined with one bottle.

With thirty silk and three rubies you can make a robe

Robot Hats are dropped by Piranha and are pretty easy to get.

Five rotten chunks gets you one leather, which you can use to make archaeologist pants and jackets at 15 leather a piece.

Bunny Hats can be acquired by using corruption power on bunnies or killing them during a blood moon. However their drop rate is super low. 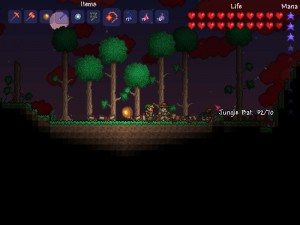 He's pretty easy to find during a blood moon.

Finding Dr. Bones: Dr. Bones most commonly appears on a blood moon along with other zombies and drops a cool hat. Blood moons happen more often if you have a water candle from the dungeon. 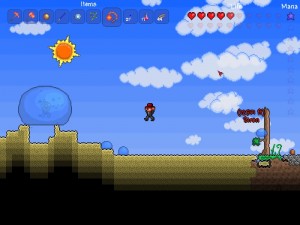 Make sure you are a looooong way from the spawn.

Finding King Slime: King Slime randomly spawns on the surface. He can drop some very cool ninja clothing. It is important to note that you need to be a great distance from your spawn for him to spawn. What works best for me is to build a house on one side of the map, set my spawn, then head over to the other side with a water candle. 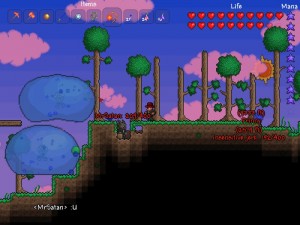 This is an unaltered pic, we've had 2 spawn on a large map.

Getting the clothier in your house: Kill Skeletron and have a spare room. – The Clothier sells Plumber Shirts & Hats for twenty five gold a piece.He also sells a  Summer Hat for one gold and black dye for one gold.

New Vile Powder use: Pour it on the new bunnies and fish for some extra fun.

Update: There have been numerous reports saying the groom is bugged and doesn’t show up at all (he can be spawned in hacked versions). At this time, our own research would suggest this as between us hundreds of hours have been put in trying to find him. If you see any top hats, they are most likely hacked. Independently verified as well: http://www.terrariaonline.com/threads/is-the-top-hat-truely-bugged.27791/page-2#post-396007

Update: As of 1.0.5 the bug where the groom was not spawning has been fixed. Information about the groom is in the entry for 1.0.5.