The Ring of Honor card game is an impressive new product from an indie tabletop developer. In this article we will be going over the game and how it has evolved over time. 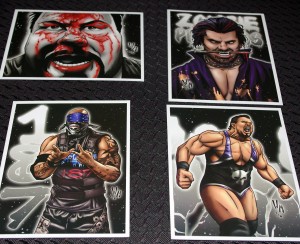 The fast pace and appeal of Ring of Honor

Advanced rules are quite excellent. There are rules for cage matches. There are rules for special matches and out of the ring antics. The combat relies mostly on dice rolls, so a lot of the game is luck based. However it still manages to keep a serious fast pace throughout.

Advanced players will find themselves wanting to play with the most advanced rule set. You will want to do trio cage matches to fully see the depth of the game. It really shines in that area.

Another part of the appeal is the feel-good aspect of the game. Unless you are playing one of the incredibly powerful cards such as Andre the Giant the matches are fairly even due to luck. This newest set we are reviewing has a lot of viable cards to use. This combined with the luck aspect make it a great game to play with friends. So far we haven’t had any hurt feelings over a match. 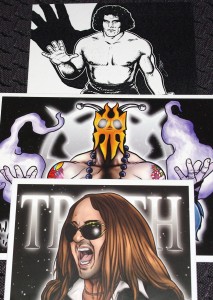 The art style and card stock quality have both improved over time, as you can see here.

A true evolution for the game

The Ring of Honor card game also marks a change in the right direction. The characters have more special abilities. One card even has multiple managers. The art has also picked up. While the art was always good, color and shine have really been added to the cards.  We are seeing an increase in complexity for the game, which is great.

Card games at a reasonable price

You can get everything you need from a Ring of Honor starter for only $29.00 USD. It comes with a ton of playable cards, dice, and everything else you need.

Wanting more from Ring of Honor

Our only major beef with the game is not having enough rules. That is a strange beef to have, but let me put it this way. After watching the movie “Nine” I said to myself, that was too short. I want more. I need more.

Simple rules are not really useful outside of your first or second game. We would also like to see some special cards for arenas and foreign objects. For example, they could have a Canadian arena to buff people like Kevin Steen. Foreign objects could replace a certain part of your offense card. 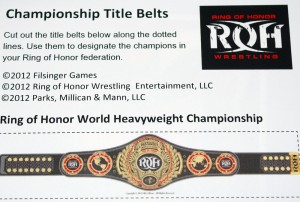 We like the idea of these as well. You can of course make your own rules for these cut-outs but we think they could go a step further.

Overall, the only problem with the game is they can do so much more with it. They’re headed in the right direction with special rules. Of course you can add your own rules, but we would be perfectly happy to buy booster packs of venues, items and managers. We want to continue to see the game evolve. 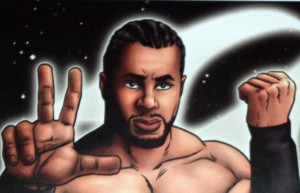 Ring of Honor: strong enough for a tabletop player, but made for fans

The core game is solid enough for any tabletop fan to enjoy. However you will get even more enjoyment if you know the names of the moves, etc. I love playing with one of my favorites Jay Lethal, for example, because I follow him on the TV show.

Final Verdict: 4.5/5 Near perfect: A great art style and exciting, fast-paced gameplay make this game fresh and fun. We only have minor gripes such as every card not having a special ability and not having arena cards. Regardless, this is a game well worth buying. We are still extremely excited to see where the Ring of Honor and Legends of Wrestling card games go in the future.