Maori--Pink Prinny goes over the new board game Maori.

Maori is an interesting idea that doesn’t really deliver.

It is hailing outside in June, and the lights have gone out. What is the modern nerd to do? Well luckily my friend who loves board games came over. We played Maori out on the front porch. Maori is pretty simple to play. In Maori you have game boards, shells, boats, and island pieces. You start with each player having their own board and 5 shells for money.

Then you have to move the boat around the square of island pieces and pick a piece to use on your board. The game ends when a player has filled up their board. Then each player gets one more turn to finish their board. Any blank spaces have a penalty. Each player is trying to make islands, gain money, acquire ships, and complete leis. So basically you want to have the most trees, huts, shells, ships and leis at the end of the game. This is just a simplified version of the rules. 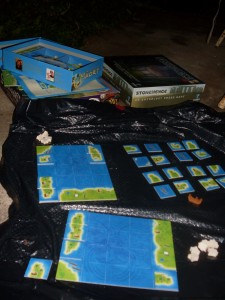 This is what it looked like early in the game.

The game is visually appealing. The boards are beautiful including the happy smiling face in the water. The island pieces are cute and nice little details on them. The boats are made of wood and are cute. Even the inside of the box is colored in some parts,  the only thing that was weird was the shells. They did not look much like shells. I would not have guessed they were shells if the instructions did not tell me. 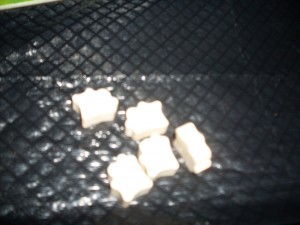 This is what the shells look like. I am not kidding.

The gameplay is easy to pick up. The only thing to remember is to collect everything you can. If it looks like the other person has more of something than you then try to counter by having more of something else. Huts are always useful though. Completing your whole map is useful, but not necessary to win. It is nice that the game is so easy, but I found that it made the game kind of boring. If you get bad luck and the other person gets most of the good pieces there is not a lot of ways to turn it around. Also most of the time you are doing the same thing with little variation. You pick up a piece after moving the boat and then you play it. You could put the piece in storage, but that could slow you down and keep you from completing your map first. There are variations on the game, hopefully those spice it up some. The atol version seemed promising, but I didn’t really want to play again. 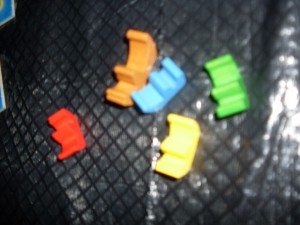 These are the boats. The smaller boats are for a variation on the rules.

Maori has good and bad aspects but overall I have to say I wouldn’t recommend this game. The game visually is wonderful, but that just doesn’t make up for the gameplay. While the game is easy to pick up it is also pretty boring. I like games with more strategy involved. It still beat most ways to spend time while the power was out. At best this game is average. 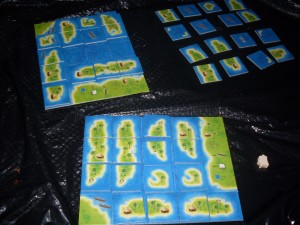 At the end of the game our boards looked like this.