Ludum Dare 28 is almost into the judging phase so we’re going to go over how it has gone and some noteworthy games from indies we cover. Of course we can’t get everyone we like on here but feel free to contact us later if you think yours is worth covering.

The Ludum Dare 28 Compo is Over

A Few Authors from Ludum Dare 28

SoS did a really cool little game in the MS DOS style known as Matchbox enjoy a world much like King’s Quest. Also much like that game there are lots of ways for horrible things to happen in general. If you like games where you get absolutely wrecked in a confusing world, this is for you. 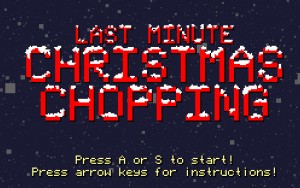 Notch (yes, that Notch) also did a game known as Last Minute Christmas Chopping. It’s one of those games where you run through a forest while smashing things in your way. You also have legs that do not obey the laws of physics as well. It’s a silly little game for Christmas.

Contributing to the Next Event

While it’s a bit late to get in this year you can of course check out their site and talk with people. You may even learn something in the long run as well. Next April you can enter and vote on which project is the coolest one all around. We are sure that they will be around for some time.