From the League of Legends website, a new trailer is out for Dominion mode.

Although League of Legends gave us a lot of data we already knew, like short games, they do give us a taste of the unique quest system. We’re unsure whether this will be a good or bad thing.

We’ve also come across some other details on this League of Legends map. For one, Promote will be making as a return on this map. This was an old spell which was removed because it had some interesting exploits. For example it could be used by Heimerdinger to promote a ton of minions as he held them back. The huge wave of minions and super minions would then swarm over the map. Will this work better in Dominion mode?

Other details include how exactly the capture points will win you the game. When both sides own equal points, neither Nexus will take damage. When one side owns more than the other, the team will less will have their Nexus take damage.

But the most disturbing mechanic of League of Legends Dominion mode? Personal score hands down. This mechanic allows you to see how you and your teammates are contributing overall. In theory this would help to settle debates and encourage people. In practice, Tribunal reports will shoot up by 100% due to this idiotic mechanic, and could cause more to buy lol accounts in order to practice and not ruin their mains league ranking.

You and your opponents can see the score the entire time, which will contribute to arguing from the start. The arguing will amp up by 100% when you get to the end screen. One person will claim he carried the team and everyone else did nothing. Huge argument swill ensue and the whole thing will just be a giant mess.

While we’re looking forward to League of Legends Dominion Mode and the Crystal Scar, we are dreading having to deal with the QQing that the personal stat system will lead to. We are really hoping to be wrong, but we aren’t. 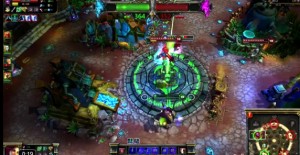