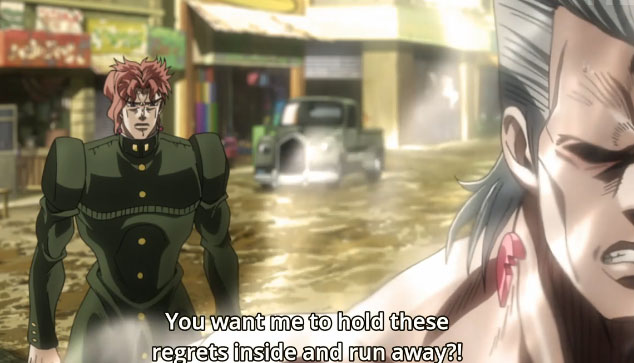 This episode deals with Polnareff getting his final revenge and Kakyoin being incredibly underrated as a character Stardust Crusaders.

Polnareff starts out filled with regret for what happened with Avdol. He nearly gets killed but Kakyoin is incredibly awesome and somehow steals a truck while knocking Polnareff out of the way when he is attacked.

The two have a man-to-man talk about Polnareff’s behavior while Hanged Man uses his ability to catch up with them. He causes them to crash then uses his power to shoot into the reflection in a child’s eye. Polnareff cannot hurt the child but has to get him out.

He eventually realizes that the Hanged Man stand travels in a straight line through light waves. He quickly makes the child blink which forces the stand into his own eye. He injures J. Geil on the way there. With the stand trapped they quickly rush to find the real body.

J. Geil tricks them into thinking an innocent man is him then attacks Polnareff again. Unfortunately for him if he had just stayed hidden he might have won.

J. Geil has a plan though and calls some beggars over to harass the heroes. With the duo surrounded by reflections he can easily kill them.

Kakyoin has a plan though and syncs up a throw of a coin with the blinking of a beggar. Polnareff sees the straight line and brutally wounds J. Geil by cutting Hanged Man. After that they quickly finish the villain off.

The next section sees Hol Horse breaking glass all over the place to give his partner an advantage. It is one of the funniest sections of part 3. When he finally realizes he has no partner he flips out and starts running. He almost gets destroyed but is saved by the woman earlier who said she loved him.

The episode closes on the zit stand, one of the lamest stands in this part. Only overcome by Wheel of Fortune in lameness the next episode deals with Joseph coming to terms with acne in his old age.

One of the best parts of the manga was as good in the anime. Other than that it was interesting to note this episode had far less censorship than usual as well.