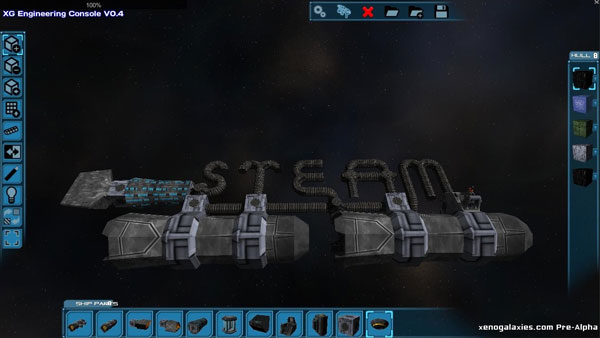 Xeno Galaxies attempts to merge sandbox gameplay with destructible environments. Many games have tried, most have fallen flat on their face. Can this one finally succeed?

Encounter Based Gameplay and Xeno Galaxies

From what we have seen so far it the universe spawns encounters with planets, enemies and traders randomly. You wander through the universe trying to guess which one will be thrown your way next.

The game will also feature mining and credits systems. Most of these will go to improving your ship and buying more bots to do mining for you. You can also put blueprints up for other players. If they buy them then you get in-game credits.

The mining you do is for materials which you trade on the open market or use it yourself. It will fluctuate as a real market does so you need to buy low and sell high. Once you get rich off the market you can create the greatest ship your universe has ever seen and dominate the sector.

Ships will be fully destructible and planets can be terraformed as well. If you have a particularly explosive fight on a ship you could breach the hull. So far we haven’t seen these mechanics in action but it does sound promising.

Players and the development team will regularly add additional content in the form of ships and random events. This could be anything from an alien race to a drifting ship mysteriously absent of crew. In theory this will keep the game updated with fresh content constantly.

The top reward is a 3D printed ship. Strangely enough this is becoming somewhat popular with those doing space-based games. Other rewards include input on quest ideas, copies of the game and mentions in the credits.  They are also on Steam Greenlight so if you like what you have seen so far then vote for them.