Dungeons and Dragons is getting a massive restart due to lackluster sales.

That’s right, after much complaining they’re doing it. Many 3.5 fans had always been less than thrilled with Dungeons and Dragons fourth edition. Why? Let’s look at some causes:

So after much lamenting by fans,  they’re finally restarting it. In an article by the New York Times Liz Schuh, Director of publishing and licensing for Dungeons and Dragons, said “We want to take that idea of the players crafting that experience to the next level and say: ‘Help us craft the rules. Help us craft how this game is played.” We hope this is true.

While it’s good that they want to listen to the fans this time, you should keep in mind they ignored die hard fans before. The days of Gary Gygax and Dave Arneson are long over. As fans all we can do it hold them to their promises. The reboot will fail as well if they don’t really take the common people’s input. 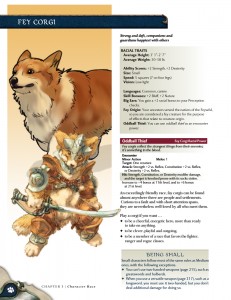 As for what you can do, you can try to get some feedback on the Wizards of the Coast Site. And well, not everything in fourth edition was bad. People loved the Corgis.