Today I am going to bring you an editorial on all the cries of sexism directed at Dragon’s Crown. I’m going to explore how I feel about the issue with you. Starting with:

The women are in fact busty, but not all of them. Every character is unnaturally, in fact ridiculously in many cases, attractive. The whole thing is supposed to have a whimsical feel to it. Even the Dwarf and Elf who no one is crying sexism over are either incredibly masculine and well-muscled or perfectly set to the standards of those who like slimmer women in each of their respective cases. The Dwarf even wields a ridiculously undersized axe in much of his art. On his in-game character his weapon is still tiny compared to his body. The whole design clearly is the case of a joke that many people just did not get. 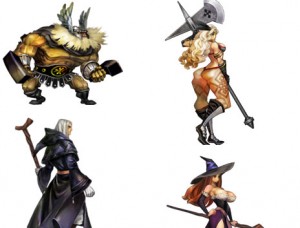 What do all these have in common? Two of them are completely under-dressed. All of them are supernaturally attractive to someone. Finally, all of them are not real and in most cases could not exist.

Then both men and women are on the receiving end. This is the only suitable case anyone can make against the game. The Wizard has an unreasonably unmarred and beautiful face. The Dwarf is a mountain of muscle and hair that would make any human bodybuilder walk off in shame. And yes, every single woman is either unnaturally, inhumanely busty or attractive. If that is the point people want to make then there is certainly some truth to it.

The Fighter and Dragon’s Crown Sexism

One character is serving as the basis for it not being sexist towards men more than many others, the fighter. He is well-dressed in shining armor that covers him up well. He is also a mountain of muscle with a perfectly unblemished face who could never exist in real life. Does it really matter that much that he wears heavy armor? Would the Amazon having the same heavy armor matter? I leave that up to you.

How Should you Approach It?

If you are a rational, thinking human being there are only two ways. One you decide everything is a big joke, as seems highly likely to me when every character is either supernaturally handsome, beautiful or otherwise attractive. Or you can decide the game is both Misogynist and Misandrist at the same time. If you go with the second one I will have to respect your opinion. I’ll just be taking it as the humorous fantasy adventure I think they were striving for. If you decide to go with my opinion feel free to check out their site.