Thermae Romae is about a Roman bath architect that needs inspiration to be more innovative. Lucius is taken by a friend to the baths when he is depressed about not being able to get any work due to his old fashioned ideas about baths. While trying to think under the water Lucius finds a hole and is sucked into modern Japan. Lucius takes ideas for baths back to Rome and adapts them to their level of technology. He has multiple trips back to Japan to visit the different kinds of baths for new ideas. That is just the basics of the story though and the live action version of the series adds more to the story to connect all the trips to Japan.

Thermae Romae the live action movie is quite a bit different than the anime and what I have read of the manga. In order to have the different trips all be connected and add another element to the story they added a girl who was always there when Lucius appeared. At first it was cute because Mami was using him to help with her failed career as a mangaka. When all the other women were freaking out as he walked into their side of the baths she was trying to draw him because he looked like Kenshiro. Then towards the end of the story as it is in the anime she crosses over into Lucius’s world in Rome. The show gets off track because Mami added the element of changing history and having to get things back the way they were. Mami should have just stayed in modern Japan to help out Lucius. Having Mami go to Rome changed the story too much and did not add to the original premise of the baths. 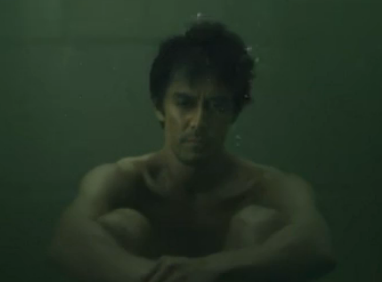 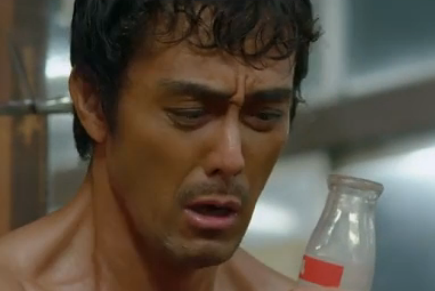 The changes were not all bad though. During each of the transportation through water scenes a man is shown singing. At first it is a little weird, but later on they add some comedy to it by having the guy miss his cue and they pan on to him doing what he does when they are not showing him.

Even if you have already watched the anime this movie  is a good watch.  Seeing all the exaggerated faces from the anime on real faces was a highlight. Also seeing Lucius really acting out crying over the milk and his disappointment that his culture is not as good as the flat face people’s culture. So much was lost with the limited animation of the anime, but the live action version is a chance to see it as it should have been.

Some things I wish they had not acted out though like the above vision of Lucius swirling through the water. Looks like they threw a doll down a toilet.

Overall the spirit of the anime and manga lives on in the live action version. Mami did detract from the story at the end, but not enough to ruin the movie. I was actually kind of surprised they did more of a changing history angle instead of lovers separated by time.