A very long time ago first-person RPG games were all the rage. Many of the games we have today, including “The Elder Scrolls” got famous with games like those.  Today we rarely see them so they are worth noticing. StarCrawlers is one with a decidedly Sci-Fi twist. Why should you care? Because the setting honestly looks fun. That is enough reason for most of us.

Another reason it caught our eye is because it is from a brand new team. This will be their first major PC game that they are pouring their effort into. So if you believe these people are the roots of the industry you should take a look at the game. And their site of course. While they have worked on some other small games this is the one they are pushing now. 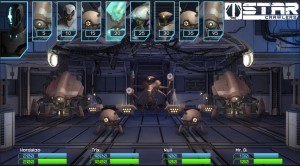 A Brief Overview of StarCrawlers

Robots appear to be major opponents in the game. You move through what we believe are space stations while honing your skills. Things such as hacking and simple combat to get through doors. Each one will be procedurally generated and it sounds like there will be many different space arks to visit.

They are also promising quite a bit of boss content among other things. We hope that they have a boss for each area at set levels. That would distinguish it from Legend of Grimrock and probably generally make exploration more fun.

At the moment no release date is on, but they will be having a Kickstarter soon. It is strange that they are putting up their promotion before the Kickstarter. Another bit of good news is that it will be released on PC, Mac and Linux. That seems to be the popular thing to do these days.