Since we last wrote about them they’ve been pushing the Oculus Rift quite a bit. In fact they’re saying it’s one of the main parts of the game now. While we are highly skeptical about the hardware itself, we see how it could be useful in this game.

They have also started promoting the game at various Comic Conventions and are giving talks on the Oculus Rift. Will has come a long way from doing an amusing game early on. This goes to show that all of you out there who dream of making their own game someday have a great chance. 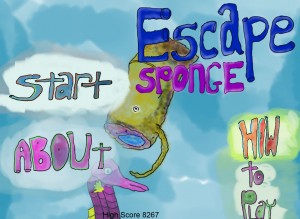 How did Soda Drinker Pro Succeed?

Really all it took was a bit of press and connecting with people. Put your name out there and if someone likes it that will start the ball rolling. We were one of the early sites to cover this game and it has ended with multiple sites and YouTube channels playing this game. In an era of social media it’s easier and more feasible than ever to get your idea out there. Take a shot at it and you could do the same with your own game, or help someone with theirs.

Getting your Soda Drinker Pro Level for Free

Right now you can play a game known as Escape Sponge and send in a high score to @sodadrinkerPro. The game itself focuses on an aquatic duo who must escape from parts of the sea. Basically it plays like an old arena shooter with power-ups. It’s fairly fun. You’ll have to send your score in by Sunday October 13th to get in.

For the few of you who haven’t played it yet you can download Soda Drinker Pro here.