Puella Magi Madoka Magica: The Different Story chapters 5-8 tells about Sayaka’s education as a magical and her fall to becoming a witch.

Puella Magi Madoka Magica: The Different Story shows more of the insecurity that Sayaka felt in her relationship with Kyousuke and as a magical girl. Not only does she feel not good enough to be with Kyousuke, but also that she is holding Mami back. The way Sayaka let her friend Hitomi go to what could have been her destruction shows that she feels that she could never compete with her and is resentful. Sayaka in this version is more spiteful and resentful than in the original version where she mostly kept her suffering to herself. 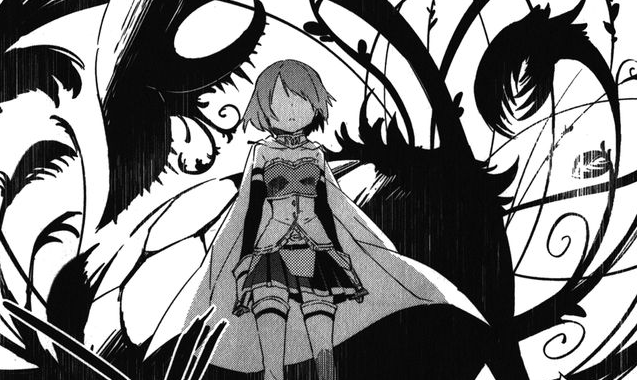 Madoka sticking her nose into the relationship with Sayaka and Kyousuke has possibly made this story sadder. It drove Sayaka over the edge in this version since she believes that she is sullied by being a magical girl and not saving her friend. It will be horrible if Kyousuke ends up realizing his feelings for Sayaka after she turned into a witch due to finding out that she healed him. Kyousuke would have taken no notice of Sayaka if Madoka had not told him about Sayaka’s sacrifice.

Kyouko was being really tsudere over these chapters. She obviously is interested in Mami still and was jealous when Mami had a new apprentice. She even helped out when Mami was in trouble and tried to get Sayaka to stay focused for the sake of Mami.

I will be very disappointed if they do not end up showing a flashback or something to when Sayaka turned into a witch. They turned what should have been a very strong moment into a short vague conversation. If they rush past it without showin it this version of Madoka will suffer. Also I see that Kyuubey is handing out misinformation again. I wonder how his talk with Mami will alter how she does things as a magical girl in the future.