Puella Magi Madoka Magica: The Different Story in chapters 1 through 4 is in a different timeline and focuses on Mami and Kyouko. It shows when Mami and Kyouko met and how Mami trained Kyouko. The time when Kyouko’s father found out about her secret and killed the family was also covered. In the end of chapter 4, the story catches up with the anime.

Before reading Puella Magi Madoka Magica: The Different Story I had read the original Madoka Magica manga and at that point I could not quite figure out what was missing. In both the manga version of the original and The Different Story there was not as much emphasis on the witch’s barrier backgrounds. They are shown in flashes, but a lot of the time the backgrounds are pretty bare. A lot of people were very interested in the bizarre backgrounds and runes from the original anime. To the point where they were trying to decipher runes and explain the world in the barrier.  The world of Madoka had quite an impact, so it does not feel quite the same with most of it cut out. 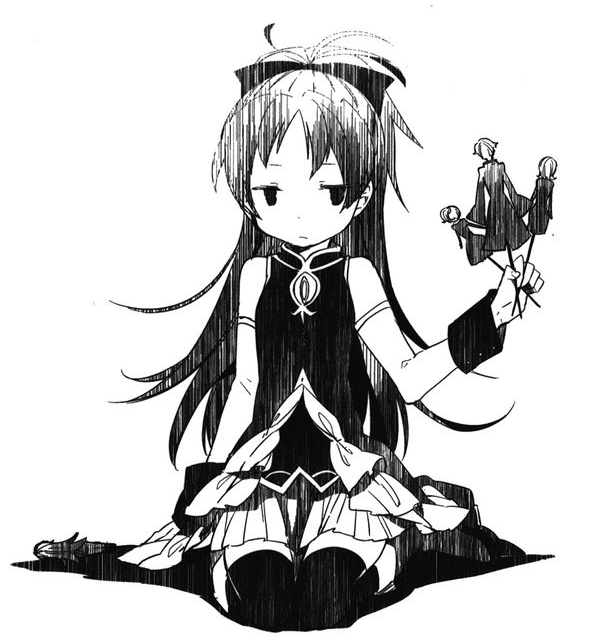 The best part of this new story was getting to see the progression of Kyouko from a idealistic young girl to the more hardened young woman that is introduced to us in the anime. In the beginning she was so pure and looked up to Mami. She believed that everything would be ok as long as she was making others happy. She even started out using mostly an enchantment magic that created copies of herself to help her fight.  Unfortunately, what she thought would make people happy was not the same as what they wanted. Since her whole basis for fighting was to make her family happy and they were gone, Kyouko regretted her wish and lost her enchantments gained from her wish. After Kyouko lost everything she was fighting for she rejected her magic and ideals. Seeing the whole picture behind Kyouko’s character makes me like her more than before.

Kyouko gets a lot of story about her life before the anime, while on the other hand Mami is mostly still the mentor like she was in the original. They share the reason behind Mami’s ideals for magical girls, but they do not share much about her life. Except for the fact that she has been searching for other magical girls to share her ideals with and fight with. None of the other girls see things her way though. 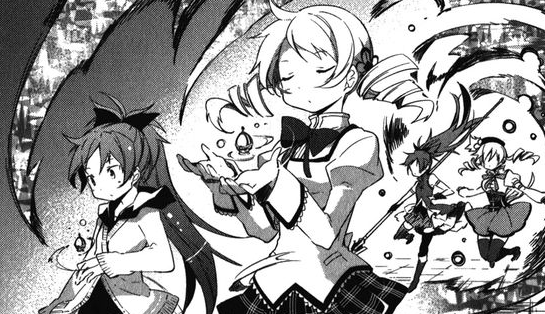 In comparison to the original story this spin-off falls a bit short. While Mami was my favorite character, so far she has been given the short end of the stick while Kyouko has been given the spotlight. Also the story is mostly going over things that the original series already talked about, but in more detail. So there are not many surprises that characterized the anime. Now that the story has caught up with the same timeline as the original, but with Mami still alive maybe it will get more interesting. It would be interesting to see Mami and Kyouko try to take on Walpurgis Night like they were talking about.