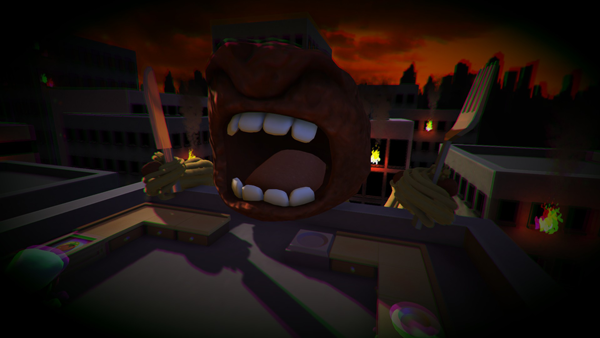 Overcooked brings an exciting co-op mechanic to the traditional combo-cooking game style. It’s a polished game from a dedicated developer.

At base the game uses mechanics like “Cook, Serve, Delicious!“. You cut, fry and deliver ingredients for a larger dish. Then you serve it up to customers or a giant monster. That sounds easy at first and it is. It’s where things go from there that makes the game special. 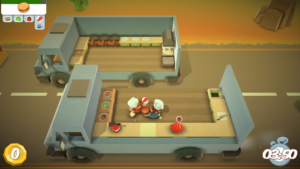 Things become very difficult when your partner blocks your way while cooking.

As the game goes along extra mechanics increase the difficulty. Now you have to work with a sliding kitchen. Now you have earthquakes in the middle of the encounter. On later levels you are cooking on ice with many problems thrown in.

Easy to Learn, Hard to Master

The concept is easy to grasp but the game relies on an intricate sense of timing to master each level. It’s not as simple as chopping and cooking the ingredients. With stages that change as you play there is a lot to master. A three-star unlock system gives players incentive to play well.

There is a huge difference between playing this game solo and with a friend. Single-player is fine but feels a bit too hectic at first.  Later it feels too mechanical once you memorize the stages.

Overcooked is a much better game played cooperatively. Only in a two-or-more player game do you get the thrill of teamwork. You also see the agony of your partner dumping a finished dish in the garbage by accident. It’s an “okay” game in single player and an incredible one in multiplayer.

Fans are clamoring for online multiplayer for this title. This one factor will mean the difference between a title with longevity and a short run for the title. We hope that the developers have some serious plans for this in the future.

The story revolves around the Onion King and a few chefs. You must satiate the spaghetti monster before it destroys the earth. Along the way you’ll travel through time and follow the orders of the Onion King. 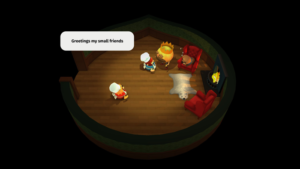 Exciting events happen from the earth to space. They aren’t ever explained well.

The story doesn’t evolve beyond that and a lot of questions remain unanswered. They were going for a comedic, quirky style with minimal story. It works for some games but we wanted to see more of the universe.

Once you’ve gotten through the intro every level feels hectic. Fast-paced and often challenging, boredom isn’t something you’ll deal with much in Overcooked. Cooking combination dishes under a strict time limit pumps up the excitement. 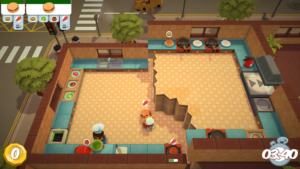 Overcooked and the Surprise Factor

Another big part of the action is the fact that you never know what to expect. The minimalistic world map only gives you a basic idea of the next map. Soon you’re dealing with attacking rodents and shifting landscapes. You’re on sliding pirate ship. Perhaps a volcano threatens to destroy your kitchen. Sheer surprise is a major driving factor for this title.

Players can choose from many mundane male/female chefs. At first, that is. Then out of nowhere you’re unlocking cat-people and a raccoon in a wheelchair. 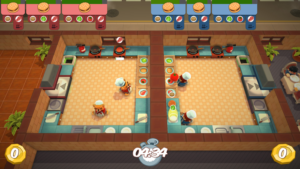 As you progress in the game you unlock versus mode. This is an excellent addition to the extensive single-player world. If you have friends who would rather fight it out than cooperate this could be a major selling point. It’s a great pick for a family or friend gaming night.

Final Verdict: 4/5 Great – Engaging gameplay and cute characters deliver an excellent experience in Overcooked. It delivers varied gameplay and interesting locales from start to finish. Only a less spectacular single player experience and minimal story mar the game. It’s still a great choice for an incredible multiplayer experience. It’s a strong contender for one of the best party games ever made.