Anime is made all the time for a variety of reasons and from various sources and with a train wreck like AKB0048 I had to look closer into why it happened.

Anime are based on many things manga, video games, dating sims, toy lines, card games, or sometimes even nothing at all since they make up a brand new story for the anime. There are also reasons behind making anime that have nothing to do with making a quality product, like selling items and promoting people. AKB0048 takes some of its basis from an idol group called AKB48 and some from a manga about that idol group called AKB49 – Renai Kinshi Jourei. It appears that the show was made to promote the idol group or just to use the success of that idol group to make the anime successful. With motives and sources like these the quality level isn’t usually very high.

Obviously things like a girl  being a cyborg are just fake, but some things about the idol group in AKB0048 come from the real group AKB48. For one thing the opening and ending were sung by real members of AKB48.  A group of nine girls were made into a new division called No Name and they are in charge of singing for the show. Also there are real members of AKB48 doing some of the voice acting. The idea of having different generations of the idol groups comes from the real group as well, but they do not have nearly the same number of generations. Also names of the famous members that they hand down are the names of some of the real girls from the group. The girls auditioning for the group all have their own original names though. 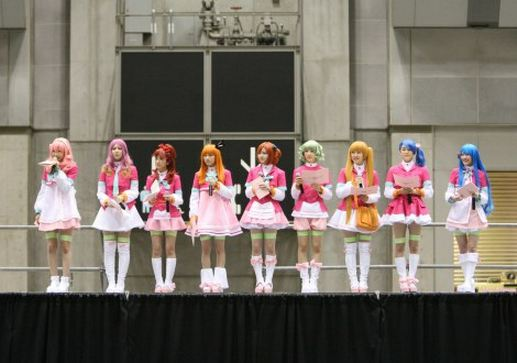 Photo from Oricon of the idols dressed like characters from the anime.

Just having a manga about the idol group would usually be enough to spark an anime, but this manga contributed more to the show than that. The manga AKB49 seems to have inspired some of the character designs for the show since some of them are quite similar for the established members of AKB48. The manga is not anything like AKB0048 though except it has girls getting into the group. AKB49 is in a modern setting and is mostly about the work that a girl has to do when joining AKB48. To switch it up some the main character is a man crossdressing as a girl and joining AKB48. It seems like they could have left that part out though, since it is mostly about the work needed to join the group.

There is a story arc in AKB49 that is a lot like Nagisa’s problems with her parents in the anime. Hiroko hides that she is part of an idol group from her parents and her dad flips out about what others will think when he finds out. He locks her away and she breaks out of the house to follow her dream and join the performance.  There will probably be even more similarities between the two stories when the girls start training to be idols. 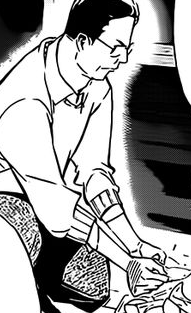 Dads now and in the future don't approve of their daughters joining AKB48.

The parts about space and the future seem to have been made specifically for the anime. This is because there are no signs of them in the manga or of course in the idol group. So the true credit for what this show turned into goes to the anime writers. I wonder what made them decide this was a good idea. I guess they thought about what AKB48 would be like in the future and wanted to show how vital JPop music is to the world. Well whatever they were thinking it is giving me a few laughs. Hopefully next time they want to make an anime based around an idol group they will think again.