In this episode the heroes face off against the full power of Steely Dan’s stand, the lovers. Stardust Crusaders has some weird music though.

Fighting inside Joseph proves problematic as his body begins acting up because of the fight. 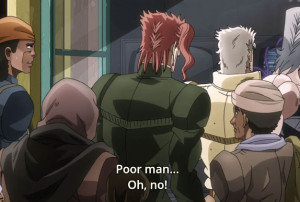 At first, as usual, the lovers seems to be outmatched as they manhandle him. As these things usually go the stand has a power they were not told about. Once again Araki breaks his one power to one stand rule. 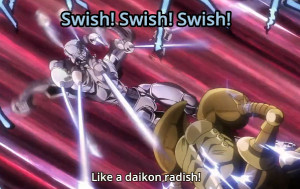 As you might have guessed the lovers stand can make clones of itself with body cells. How is that not two powers? No one knows. 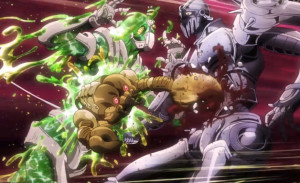 Unfortunately for Steely Dan Kakyoin is unstoppable and wraps up the clones to find the real body. Then they start beating him down and he has to escape. 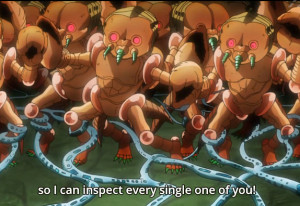 Unfortunately as with so many villains here, Steely Dan gets cocky.

Steely Dan calls his stand back and holds a young girl hostage as well with it. However it does not work because 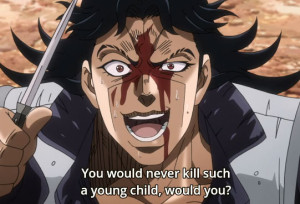 Steely Dan doesn’t think this through.

his stand is wrapped up. Jotaro and Kakyoin defeat him with a combination attack and he is blasted into the scenery. As usual the party survives at the last possible moment. But what sort of fighting series would this be if that weren’t true? 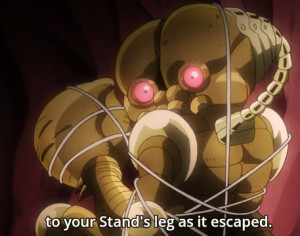 Oh gee wow I probably should have noticed that my entire body is wrapped in this stand that I can see.

So one thing that has gone wrong is the music. Odd noises and dubstep have shown up throughout the serious now. Why? I have no idea. Cut that out. Other than that it has been great as usual. Even the animation has been good lately.