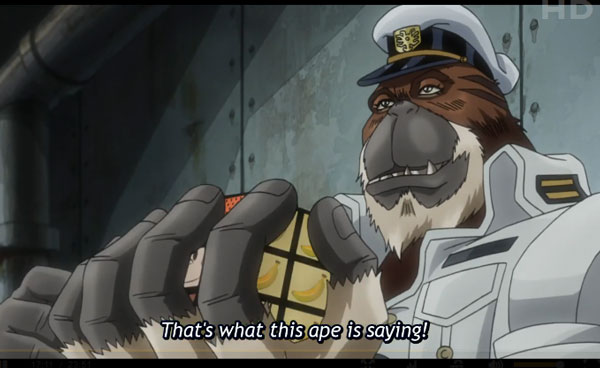 This particular episode of Stardust Crusaders is more bizarre than most. For those of you who have kids we have to let you know not all of it may be suitable for minors. There is actually some mild, brief nudity which we won’t be putting up but it’s there.

The crew is on a ship and things are going very, very wrong for them. Things are moving on their own and killing people which leaves everyone but the Joestar crew terrified. Not without good reason. 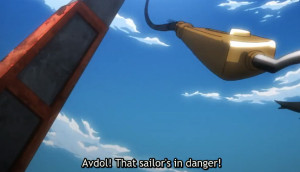 Things get even weirder because there is a caged monkey who can pull objects out of nowhere. That is not suspicious at all. Nope. The Joestar team continues to be puzzled while the young female runaway goes to get washed up. She meets a really creepy monkey on the way there. 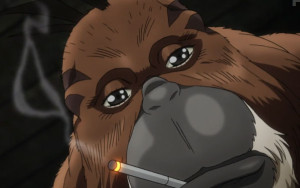 Unfortunately the monkey turns out to be a demented pervert who bothers the young runaway while she is bathing. Yeah, this episode is getting very weird and is not for kids. Fortunately Jotaro is there to intervene. Unfortunately for him it turns out the Monkey is a stand user. 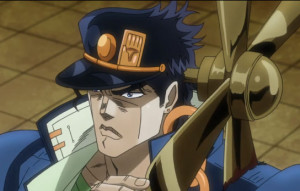 The monkey uses his stand “Strength” to control an entire ship made simply out of his will. He easily disables all the heroes and almost kills them. However Jotaro distracts and then defeats him by using part of his own outfit. 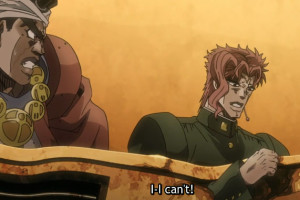 Since the ship was a stand and the monkey is out of commission it sinks and leaves them stranded. However a massive ship shows up out of nowhere, and with no explanation, to save them.

This episode starts the obligatory “really creepy episode” where a villain menaces an innocent kid, girl or grown woman depending on the series. Araki did like the gross-out horror but also did stories that were more cerebral. There is of course something innately horrifying about an innocent person being menaced by a dreadful villain. Araki continues to have scenes like this happen every now and then in the series.