There’s a new Contra-style shooter out from an indie developer who could use your support.  Johnny B has a sequel called Infernal Edge 2. We previously featured some of his interesting games in an earlier article. It’s worth checking out for the free games alone.

Infernal Edge 2 is the most industrious game small developer Johnny B. has done thus far. But why exactly do his games stand out? Well check out his site and Infernal Edge 1. Most indie developers believe that “retro” means you should have few colors and very little going on as far as graphics. Johnny’s games throw this idea on their ear. They always have a ton of color and the screen bursts with activity. It’s not some boring two-tone.  It’s like the actual retro shooters had. Like Contra had. And all of his games have this. Sure he has been thus far limited by funding, but I think we could see something even bigger from him.

On that note, we have to mention a disturbing trend in indie gaming. Many developers just don’t put any effort into their graphics. Even successful developers often go with two-stroke colors with very little action. This wasn’t how old games looked with the exception of Atari games. As gamers we really shouldn’t be accepting this. To illustrate my point would you rather have a game that looks like:

ET, which is 100 times uglier than some much better games. Which is how some developers make their games. 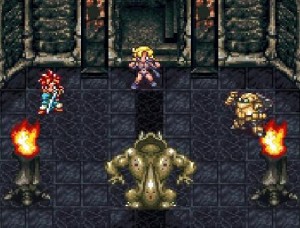 Or Chrono Trigger, which used simple graphics and was still beautiful? Which to many was the best game ever made.

Now he’s making Infernal Edge 2 and is going to put a huge amount of effort in. We want this project to be successful so be sure to check it out. He is planning on having a full staff for this game. We’re hoping that he has a full and graphically diverse title at the end. And he needs your help to do it.

As for the gameplay, you can obviously expect some of the same as the first. The first had an interesting and diverse mix that was somewhere between Bionic Commando and Contra. It was quite fun.