Are you tired of platformers that hold your hand and are beaten in one day of gameplay? Most people aren’t even though we are. That’s why Gigantic Army is a breath of fresh air. It is a platformer that plays like a shmup. With a decent but not soulcrushing difficulty and amazing art style this game is probably one of our favorite doujin games in quite some time.

Gigantic Army really shines in the gameplay. You have one robot to start and can choose several weapon modes including missile spreads, grenade launchers and laser weapons. You also have a block, jump jets and a melee attack for those of us who like to speedrun. At base this may not amaze everyone. However each stage is perfectly paced to keep you active and difficult enough even for veterans to enjoy it some. Is it a bullet hell for those who adore the hardest shmups? No, but it does not need to be. That being said it is far harder than most platformers we see today. The attack patterns of a few bosses are particularly impressive. 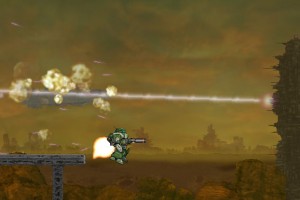 Gigantic Army makes a good case for games being art. Why? Because in every level there is a foreground, mid-ground and background being fought in. The first stage is particularly impressive with a giant tower of guns fighting a drop ship which you can see above. Only playing the game could give you the full impact. 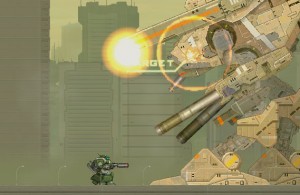 While it is a traditional jumping and shooting platformer it does not feel like it. You are racing against the clock and fighting droves of enemies constantly. Huge bosses punctuate the experience and many have destroyable parts. It feels less like some of the boring games we have today and more like a few of the energetic games of old. Perhaps like Gunstar Heroes even, one of the best ones. It really will take you back to that era if you play it. 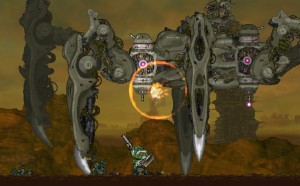 5/5 Magnificient: Rarely does any indie game show this much effort by the developers. The levels were obviously well tested to make sure they flowed well with the game. The art is so well-crafted that believable battles are happening in the background as you play. The only thing that anyone could say against it is that the style of gameplay is not new. That being said no other game in the modern genre switches up the difficulty like this game. It brings you back to a time when platformers could be hard and fun, instead of the diluted titles swarming the industry now. To give such a deviation from the normal platformer formula less than a perfect score would be criminal. You can get the game here or on several retailers. It has also been Greenlit.