No Game No Life episode 12 and Season Review

Home / Blog / No Game No Life episode 12 and Season Review

No Game No Life episode 12 and Season Review

No Game No Life episode 12

No Game No Life episode 12 is about Blank’s team winning the game and the aftereffects. Not only does Blank get the lands that humanity used to inhabit they also end up with all of the Federation absorbed by Elkia as well.

Have to wonder how Izuna did not get called out for suddenly being able to move at inhuman speeds. That was obviously a cheat. Anyone looking should have been able to see that it was not normal and it was not brought up as being part of the game. Even if the player does not know how the cheat works, why can’t they call it out anyway? They were caught cheating quite visibly. The grandfather telling Izuna where they were was not something they could show, but her movement was obvious.

Miko was quite easily tricked by the coin throw. She has seen that Blank knows how to manipulate almost any game. Also they do not get into games without knowing the outcome ahead of time. Yet she believed she had one over on them. As the leader of the country she has had the wool pulled over her eyes multiple times. Then they reveal that she is one of the old gods. I guess this explains why she only used to be a god.

The best parts of the series have always been the games that Blank enters. Especially the high stakes games. In every game they find a way to pull through that is off the wall. It will bug people who want everything to make sense, but I find it interesting to see how they will do it each time. Due to the surprise being key there is not a lot of reason to watch this show more than once.

The worst part of the season is that it ended when it did. There is still so much that needs to happen and they just revealed another race which feels like a cliffhanger. That is not a good note to end a series.

No Game No Life is not a great series, but the games in the show are pretty fun to watch. It is a lighthearted show to not take seriously. Taken seriously there are so many plotholes. Blank does things that are impossible all the time. 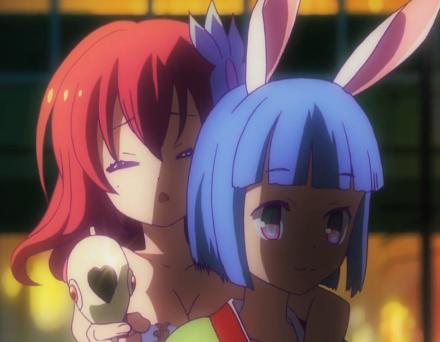