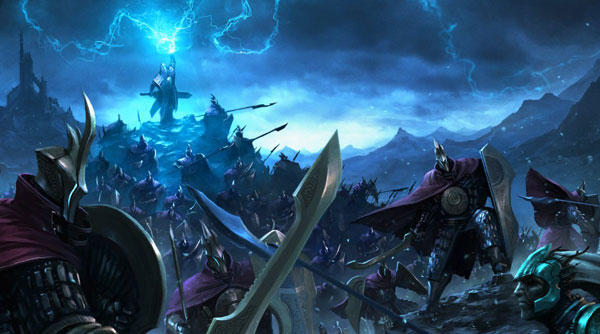 We’ve announced Endless Legend for you several times but only recently have we gone into it in-depth. So far the game has proven itself remarkably fun and varied in storyline as well as gameplay.

The game itself uses a turn-based civilization style system for most of the gameplay. You take your hero unit and bring minions with them. The fun lies in meeting new races and subduing them to strengthen your empire. Ruins are another big part that gives you a significant boost.

So far the art has been very good in both 2D and 3D forms. We assume they’re going to continue working on the 3D models though. The music seems significantly finished and has a very nice and mellow fantasy sound to it. when it’s finally released I personally will be adding a few tracks to my playlist.

Perhaps the most interesting part of the game so far lies in the ability to incorporate smaller tribes into your race. You can start off as a human or magic powered knight who is little more than a suit of armor. But you can also add demons, centaurs and even female warriors by taking over their villages. This adds a lot of variety to the battles.

Heroes also have individual equipment from unique items to specific tech levels. So you can be sure that your opponents will not just be doing the same thing you are. Overall battles are shaping up well in this early stage.

Another big part of the game consists of events which change how you play. For example in winter getting around can be more diffcult. These add another random element to the game to shake things up.

The game also has the technology, progress points and hero management everyone would expect to see. The game has quite a bit of depth in that area since it allows you to micromanage all of your outposts with useful heroes. You can also use skill points to create a combat monster or a management mogul.

Becoming a Part of the Endless Legend

From what we’ve played so far the game is very smooth and quite fun. We hope it only improves as it goes along. If you are interested then check out their Steam page. As with all Amplitude games you can talk with the creators if you have the early edition and have your voice heard. It’s a good way to do business.