Nerd Age’s Scholar:We are very proud to announce an interview with Cobalt developer Daniel “thewreck” Brynolf. Be sure to check out his “Wreckopedia“.

He is putting in a huge amount of work on the new game Cobalt from Oxeye Studios and a little company called Mojang. You may have heard of them. We want to thank Daniel again for his time, and let us get down to business. 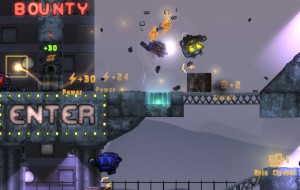 NA: How did you come up with a crazy idea for Cobalt like having as many players as controllers?

Daniel:To me its is not that crazy. Since our goal is to in the end support networked play, it seemed unreasonable that there would be a limit to the amount of controllers you could play with if you so prefer. Perhaps it is a console thing. I remember my old N64 and its 4 controller slots, of course if you were to develop specifically for a console like that, starting out with a limit of 4 would be the standard.

I was a big fan of rag-doll kungfu when it came out, and i was especially impressed with its support of multiple USB mice. I guess it is something I’ve kept with me deep down as inspiration.

NA:Have you tested how hectic Cobalt can get when you plug in as many controllers as possible?

Daniel:We played once with 5 usb controllers and 1 keyboard. Sure it was hectic, but you always keep track of yourself so while it might look completely unmanageable for an onlooker, its very easy to follow as a player. Only situation that sometimes gets confusing is at respawns, but that is something we can improve.

NA:Tell us a little about your team on Cobalt, and what they bring to the game.

Jens “jeb_” Bergensten is the guy who makes sure Daisymoon works, but he also helps out with various lua stuff and a lot of level design too. Pontus “kinten” Hammarberg does lots of art assets, such as tiles, set pieces and details and backgrounds, but also level design och sounds and I often end up sleeping on his floor. Mattias “anosou” Häggström Gerdt is responsible for the music.

We all help out with the design of the game.

NA: This game definitely looks as good as Braid. What games did Cobalt draw its inspiration from?

Cobalt draws its inspiration from many things. In no particular order: Fallout (I & II), Blade Runner (the movie), Tron (the new movie), Blueface (original prototype from 2001), Macgyver (the series), Counter-strike (1.6 and source), Quake (I & II & III), Syndicate (and Wars) general 60’s retro-futurism and I think a portion of Knight Rider (the old series) as well. 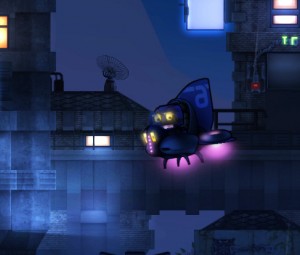 NA:Can you tell us about some of the vehicles and how they operate?

Daniel: We have currently only created one vehicle, the Jet-bike. It operates like you would assume a hovercraft operates. Up is up, left is left. But it has the added detail of being able to spin wildly in the air when holding the roll button. Automatically retracting landing gears too!

Vehicles act like an armor too, which can be especially funny when somebody lands a huge missile against your jet-bike, making the vehicle explode into pieces in all direction, with you safely being tossed away from the explosion (not shown in any video). Obviously in reality if this were to happen you are best to make sure you have insurance cover from places like moneyexpert.com, so you have a back up.

NA: While this is certainly an excellent thing for fans, why did you decide to make this game so easily modded and edited in an era where companies are giving players less power?

Daniel: I would say that this is a misconception or an over-simplification. Pc-developers have always been fairly mod-friendly, and those who were back in the days are more or less so today. There have been some lock-ins, but often these companies never sanctioned modding in the first place anyway.

Within the indie game scene I’d say things are probably moving towards openness, which we consider us part of. So its not strange to us. I would however strongly agree that things are moving more towards lock down and black-boxing as an effect of multiple platform releases. Some titles while only on PC had lots of modding support, while now releasing both on console and PC doesn’t even allow you to host your own servers.

That said, For us it was more a side-effect of our technical choices. The reason the code is so fun and fast to work with, is the same reason it’s easy to mod, Lua-script.

NA: We definitely saw one of your characters flying by screaming “ooooooooh” while attached to some sort of pencil or stick in your trailer. Will we see a lot of zany humor like this in the game?

Daniel: Don’t know honestly. But the game is pretty zany as it is. These sorts of situations emerge naturally from the game-play so I don’t think there is a need to use cut-scenes or such to get this feeling in the game.

NA: Will you be doing additional character models or have you considered adding any in the future?

Daniel: It should be noted that you can control any character in the game, including all enemies and sentries and even surveillance cameras. So, yes, there are a couple of different characters in the game already, but they don’t have the same movement as our hero metalfaces.

If we add more characters it will most likely be because we wanted more variation in enemies which naturally spills over to the versus possibilities. There has been talk of more customization though, but we will see.

NA: After bringing us such unique games as “Dawn of Daria” and “Harvest: Massive Encounter” what does Oxeye have planned for the future in general?

Daniel: Oxeye is one of those companies that never plan for more than 6 or 3 months at a time. So for the time being we are working on Cobalt. What happens next is for the future to decide.

NA: How do you think your association with Mojang will boost the game’s reception?

Daniel: We hope people will give the game an extra glance, that extra glance that makes people see the game’s potential and fall in love with it.

NA: Do you have any advice for other indie developers out there?

Daniel: Stick to your convictions, remember to teach your players how your game works, use more than one source of inspiration, pay attention to the details, design/implement/optimize separately, try not to work 100% alone if possible – find people that challenge you yet support a common goal, surround yourself with people that are more competent than you are.

Make sure you are ready to risk everything, make sure you are content with ending up with nothing, don’t follow increased income with more expenses, believe that its possible to create energy in the world – that things are not a zero-sum wager, be incredibly tolerant, enjoy life.

NA: Once again we want to thank Daniel “The Wreck” Brynolf for taking time out to answer our questions. We will be sure to have more previews and a review of the final game up for you later.