Somewhere between a version of Twilight that is not god-awful terrible and a typical Seinen fight series lies Blood Lad. As with any Seinen there is a lot of protecting women and punching people in the face to be done. So let us see how the anime stacks up to the manga. Spoilers happen in the first episode so stop reading here if you do not want to know anything. 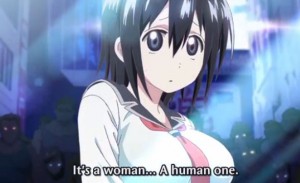 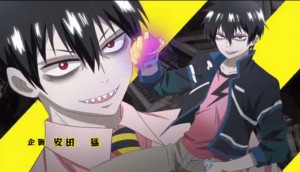 For a Seinen the main character does not do a great job of protecting women. The vampire Staz meets the human girl Yanagi in the first episode and near-instantly falls in love. Unfortunately a demon using carnivorous plants attacks and no one stays behind to protect her. Staz quickly crushes the plant master’s heart but Yanagi is promptly devoured alive and turned into a ghost in the first episode. Strangely enough after a few awkward scenes where she needs clothes no one is even bothered by the fact that she just died horribly. Yanagi seems more traumatized by the fact that ghosts start out naked than the fact that she just died painfully. This is really strange, much like the whole series. 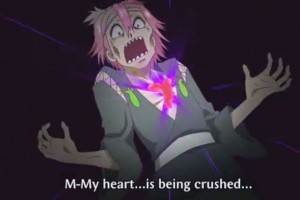 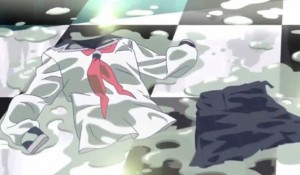 The rest of the series focuses on reviving her along with the fact that she is becoming a hybrid. Later on she has to take demon blood to not vanish which will lead to her developing demon traits later.

Blood Lad continues this throughout the story. It’s a Seinen that reads like a Shounen, then doesn’t, then becomes a mystery. The extremely erratic flow and motivation of the characters makes it a bit difficult to read. The only constant is the same one in most other Seinen, relationships between men and women along with some family troubles.

The further episodes, if it stays with the manga, focus on Staz making allies and meeting with family to help the girl he (doesn’t realize) he loves. They also go between the human and demon world on their search. Blood Lad has  a strange style that tries to do a great many things at once, not always successfully. 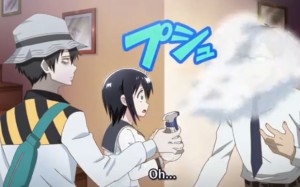 Staz and the Magic Teeth

Staz also has magic vampire teeth that let him do everything from grind them into a mind-control spray for humans to drain energy from other demons. Most of the Blood Lad characters have some ridiculous power. He is also, of course, immune to traditional weaknesses like sunlight. 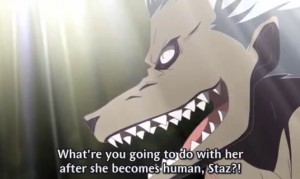 The situation is complicated even further by love triangles between the main characters such as the werewolf amusingly named “Wolf.” Yes, it’s vampire vs werewolf at one point. The characters have already had to deal with the fact that they come from different worlds, and I’m guessing the ending will deal with all of them coming to terms with that somehow. 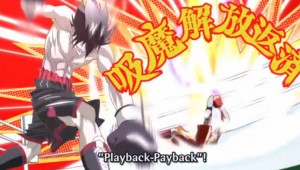 The Art of Blood Lad

While not terribly beautiful the art is functional. It has a distinct cartoon style in many scenes that distinguishes it from the manga. While the story appears to be staying mostly the same the art style really gives it a different feel.

The fights do still have a unique flair to them, like when Staz fights Wolf in the above picture. They seem to put a good amount of effort into these parts as you might expect.

The only significant difference between this and the manga is they had to tone some scenes down. The heart crushing is nowhere near as brutal but has a similar effect. Basically it is the manga for all practical purposes. This means it has the same ups and downs. It’s unique but the story is all over the place, although you only get to see that later when Staz has his family get involved and things get somewhat confusing.

The Final Verdict on Blood Lad: Watching and Reading

Since this series does so many things at once it’s hard to say how I feel about it. It’s a comedy that uses “Horror Relief” of brutal violence, death and other unsavory things. However none of these bother the characters with rare exceptions. It’s really hard to tell where the author is going with it. So before I give it a grade it will require further chapters to see if the author can tie this crazy mess called Blood Lad into a coherent whole. If you’re someone who is looking for something unusual and different out of the Seinen genre, this is it.