It is easy to overlook segments of the indie market. But PC games are not the only market for indie developers. So we wanted to take a moment out to mention the XBLA developers. They are having their own Indie Games Uprising event. 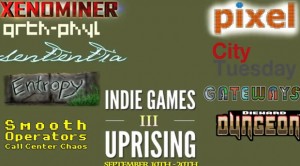 What is the Indie Uprising to XBLA/XBLIG gamers?

This will be an entire week of games being released from the 10th to the 20th. Each day a hot new indie game will come out for you. Each day you will get a new style to check out yourself. But let us move on to what the games will actually be.

The Indie Uprising for XBLA Games

The games in this bundle are wide and varied. You have everything from puzzle games to roguelikes. You can be sure that there will be something for you out of this event. But that is enough with the vagaries, let us get to the specifics: