Worms Revolution is coming from Team 17

That is right, Team 17 is moving forward with Worms Revolution. Team 17 is finally turning their attention to a new game with a new engine. This one has the 2d gameplay of the original games with a new 3d style. 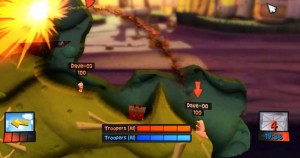 These shots are from a very early edition of the game. They may not be the same as the final product.

So far the game appears to play very similar to Worms Armageddon. However the big addition that the game sells itself on is nice. There are now water physics beyond simply drowning. There are water weapons which you can use to drown you opponents. As a result we can expect a whole new level of strategy from this game. 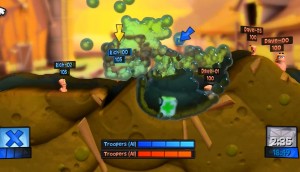 Dive into a new physics and graphics engine

As you can see from these shots, the graphics are quite nice. We can only hope that the worms formula has been shaken up to give the game a new feel. Of course we can assume many things are back. The Holy Hand Grenade and the Super sheep have both been confirmed. The power-ups which randomly drop also are making a comeback.

A strange new look for the worms in Worms Revolution

Perhaps the most interesting part of this new game is the fact that the worms look different. Instead of all of them basically being the same worm, they have different sizes and faces. One of them is huge and looks like a heavy. Another has a huge brain on top. While we have not had anything confirmed, this hints at classes or at least types of worms. This is something that the Worms series has needed for a very long time indeed. While we love Team 17, we have really been looking forward to them trying something new for a long time. We will be watching this game, but you can also check out more info on the Team 17 site.