Unfortunately a significant number of changes have come since this Terraria guide including: Rocket Boots are practically useless, hell doesn’t flood very well and  Jungle Armor is now craftable. Future parts of this Terraria Guide are below:

This is the living Terraria guide. It will cover all the basic things you need to know and will be regularly updated as the game updates.  You may also want to check out Terraria Online for information.

Update: Cobalt has been replaced with Jungle Armor. Don’t worry though, because it works the same and is found in the same area. The guide has also been updated with how to get the wizard cap. Many of the other armors have also had updated graphics since the start of this Terraria Guide. Once they stop updating armors, we hope to do a gallery.

A house you can make later on.

If you have a fresh character begin by gathering some wood and also some cobwebs from underground. Cobwebs are easy to find and let you build a bed. Once you have these, you will want to build your house near the Dungeon or the corruption. The corruption is easy to notice because you will be attacked by eaters of souls. The Dungeon is also easy to notice because it has bricks instead of normal materials.

This will allow you to FARM HARD later on. To save you will need a bed, walls and exterior walls made of wood bricks. You can make all of these at the workbench and some without one.

When you make your house, make sure you have rooms with doors (lots of people forget these, don’t or merchants may not spawn), a table/chair right next to each other and a light source such as a torch. Have about 6 or 7 such rooms to begin with and NPC’s will fill up in no time. Wooden platforms are invaluable for having tall buildings.

Collect Fallen Stars, these let you make Mana Crystals to raise your Mana. 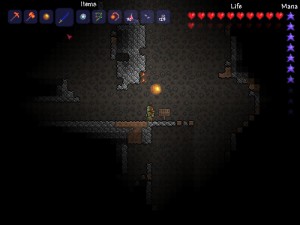 You can tell when you are at the third layer by using this background.

Eventually, you will want to make a furnace with some stone, wood and torches. Eventually you will want an anvil using Iron Ore, which lets you make weapons. 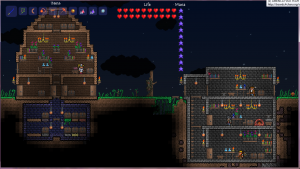 While aesthetically pleasing, the craft areas are bunched up. This can cause problems if you have a large number of materials. 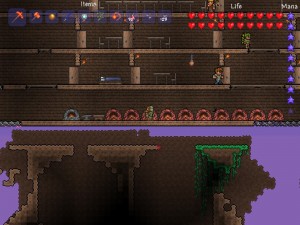 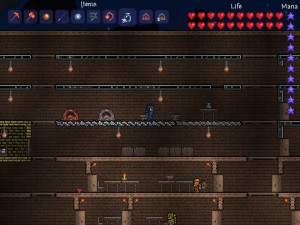 A proper setup has the work areas evenly spaced, including an alchemy table. 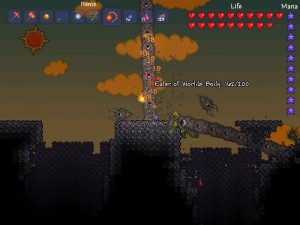 When you hit mid level, you will want to kill the eater of worlds alone or with friends. To do this, you can gather up Vile Mushrooms from the Corruption. You use them to make vile powder at an alchemy station. To make an Alchemy Station, simply place a bottle on a table, you can make bottles using glass. You also need Rotten Meat. You need 30 Vile Powder and 15 Rotten Chunks. With this, you can make Worm Food at a Demon Altar that resides in the Corruption.

Demon Altars are abundant in the Corruption.

Only use this item in the Corruption or you will die. You can also break Shadow Orbs to summon him, these reside at the bottom of the Corruption. Shadow Orbs also cause meteors to fall randomly, which is a useful material for Meteorite Armor and several weapons.

Breaking Shadow Orbs can cause valuable Meteorite to fall.

These often reside at the bottom of the Corruption.

The Eater of Worlds is not hard, but if you have trouble you can drag him back to your base. Mace weapons work very well as they hit him multiple times. When he finally drops, he will drop some Shadow Scale armor and enough Demonite/Shadow Scale to make at least one more piece. Repeat this until you have all the items made from him which include a full suit of Shadow Scale, the Breaker and the Nightmare Pickaxe. 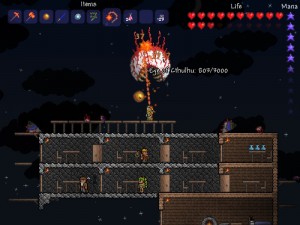 He's not nearly as tough as he looks.

If he proves too hard for you, simply farm lenses at night until you have 10+. These allow you to make a suspicious looking eye at the Demon Altar. You can use these to summon the weaker Eye of Cthulhu. He’s much easier to beat, but drops less Demonite by quite a large amount. He also doesn’t drop Shadow Scales. 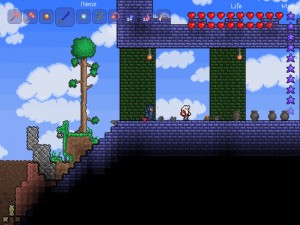 Here he is, the Dungeon is hard to miss.

You can take out Skeletron at this point, there will be an old man at the dungeon. Build a spawn point near him and set it. Then talk to him at night, but remember that you must kill him before the night it is up or he’ll instantly kill you. This is easier with some friends. Once he is down, you can loot the dungeon for a variety of good items including the Cobalt Shield and Muramasa. These are two of the best items in the game. 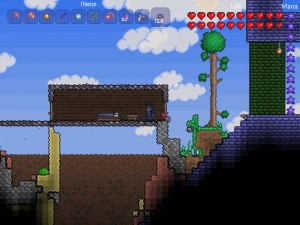 This will make the skeletron fight very hard to lose. 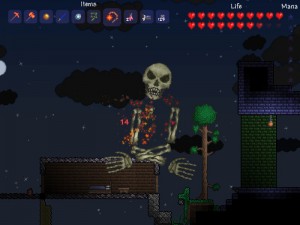 He has a lot of health, but you can solo him with mid level gear.

Don’t try to enter the Dungeon without killing Skeltron at night, because he will come after you and give you a fight you can’t win. Also, if he is active at any time during the day he can instantly kill you. 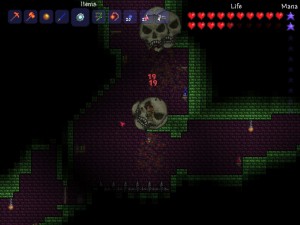 He will ruin you if you don't deal with him at the entrance. Make no mistake.

Craft a depth meter and make a stairway into the sky at around 430 feet. Then build left or right, you should eventually find a sky island on a small map. Medium and Large maps are much harder because the islands can be anywhere from 400 feet to the top of the stage.

Another topic of interest is goblin invasions. These are most common after 6 hours of play. Although no one is sure how they’re triggered, it seems likely that you need at least one person with over 200 health and you need to have smashed at least one Shadow Orb. Goblins are very useful because their spellcasters drop the extremely useful Rocket Boots.

At this point of the game, you will want to make some Molten Armor, Pickaxe and Hamaxe. To do this easily you need to find an above ground water source. The water at the left and right end of the world is ideal, but a pain to mine unless you have TNT.

The end of the world, a great amount of water you can drain into hell.

Once you have found a lake etc, go to the bottom of the lake and dig straight down. Dig air pockets to the left and right to avoid drowning, unless you have flippers. Dig straight down until you reach Hell, which will flood from all the water. On the way down you will want to let some lava hit water, to make an Obsidian Skull. This item will protect you from burning to death in Hell, and takes 20 Obsidian to make. 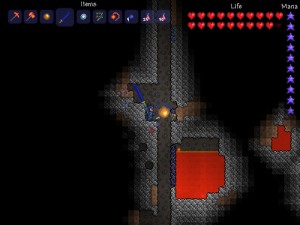 You can also combine water with lava before reaching hell, to make an early Obsidian Skull.

The huge amount of water hitting lava will create masses of Obsidian which you can mine. At the same time, you can mine Hellstone without fear of falling into lava. To make a full Molten Armor set you will need 210 Obsidian and 630 Hellstone Ore, as well as a Hellforge. Hellforges are quite common in hell and you can find them near the distinctive Hellbricks. 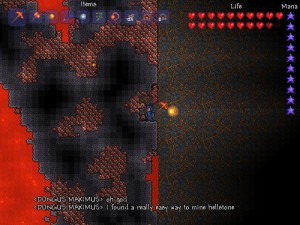 You can mine without being hurt here.

If you manage to find a world with no water at the end of the world, you can simply Ivy Vine or Rocket boot your way down to hell. If you mine close enough to the edge and close enough to the bottom, no enemies will spawn. While this doesn’t work for gathering Obsidian, you need much much more Hellstone than Obsidian anyway. This can however, cause crashes. 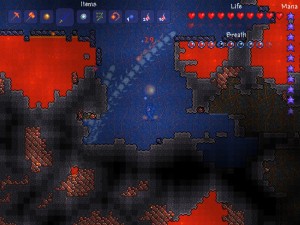 This picture shows the reddish Hellstone and dark Obsidian you need.

Do not try to break a Hellforge with a normal hammer. What you have to do is knock the floor out from under it, which will cause it to fall. You can then take your new Hellforge up to smelt yourself some Molten items. Just put it down and smelt 105 Hellstone Bars. You may have to go back down in order to get more for the Pickaxe and Hamaxe. 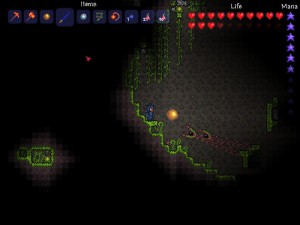 Remember that jungle I told you to mine to? You will want to go there now to farm Hornets which drop Jungle Armor. Dig horizontally until you find it. You will also find snapping plants called Maneaters, you need to farm these for  Jungle Armor and Vines. 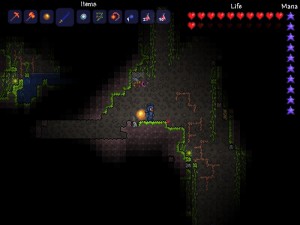 Yet another denizen of the jungle, it drops the rare and valuable Jungle Armor.

You also need to farm the jungle floor for Jungle Roses. You need 3 Vines, 30 Jungle Roses and 1 Grappling Hook to make the extremely useful Ivy Whip. One more item you can make is the Blade of Grass, it is made from a Silver Broadsword, 40 Jungle Roses and 20 Stingers. You can also make a Thorn Chakrum from Jungle Roses and Stingers, but it is not very useful. Just to warn you, getting the Jungle Armor can be quite a grind. It took me around 2 hours to farm 2 sets.

Once you have this Jungle Armor, you can get some Hermes Boots, (commonly found all over) Rocket Boots, (found mostly on Goblin Sorcerers) and 3 Bands of Starpower (dropped mostly from Shadow Orbs in Corruption). Put all of these items on, and find a mountain of some sort. Build a launch pad and get a running start, this will give you huge momentum and elevation. 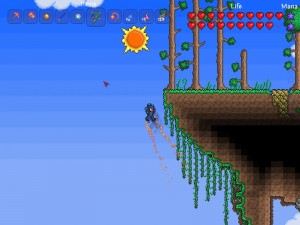 You can simply fly to sky islands on small maps.

You will be able to fly for quite some time and will very likely hit a floating island unless you are on a medium or large map. This is best done on small maps, as you can easily find all your floating islands in no time. When you’ve found them all, there are usually around 3, just restart a small map and repeat. You can find Balloons, Lucky Horse Shoes and possibly even Rocket Boots (extremely rare drop).

Once you are properly geared, head down to Hell and swim near some lava. Bone Serpents will spawn, which is what you want. These drop the massively powerful Sunfury, a mace which hits multiple times for massive damage. Unfortunately, this drop rate is very, very low so you will have to kill them for quite some time. 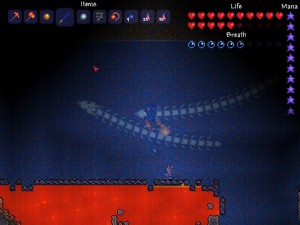 You are going to be farming here for quite some time.

Your final items should include a Magic Mirror, Ivy Whip, Muramasa, Jungle Armor, Molten Armor, Molten Pickaxe, Molten Hamaxe, Sunfury, Cobalt Shield, Rocket Boots, Hermes Boots, Bands of Starpower, Bands of Regeneration and an Obsidian Skull. You use the Jungle  items for getting around and the Molten items for bosses etc. At this point there isn’t much to do but build interesting structures or fight friends. 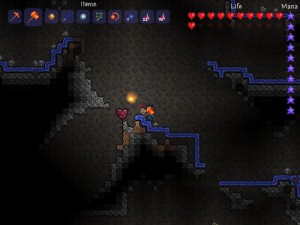 Late game you'll want to grow a mushroom farm from seeds, so you can get strong health potions. 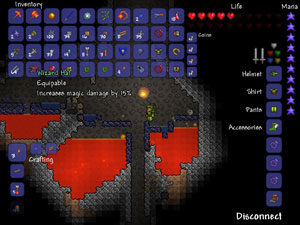 The wizard hat can be found at stone level underground, from the new enemy Tim (a skeleton caster). This enemy is very similar to the dark caster in dungeons.

Here he is, in all his glory.

Standing triumphant with the Wizard Cap.